“With VISERA ELITE III, we provide a best-in-class surgical visualization platform designed for multiple medical specialties and configurations, allowing HCPs to fully focus on the patient during surgery. By incorporating the technologies of its predecessors VISERA ELITE II and VISERA 4K UHD into one platform, VISERA ELITE III enhances the quality of endoscopic surgery, contributes to improved efficiency in the operating room, and hereby elevates the standard of care,” said Kanichi Matsumoto, Global Head of Surgical Endoscopy at Olympus.

One System for All

Innovation That Grows with Need

The platform allows software upgrades to add new surgical imaging functions as needed. Switching entire surgical visualization systems to access the latest technology is no longer necessary, which not only sets a new standard and provides a high degree of flexibility, but also makes VISERA ELITE III a future-proof investment.

VISERA ELITE III system comes with a focus adjust mode during 4K surgical observation and is equipped with the EDOF (Extended Depth of Field) function that allows precise endoscopic observations through continuous broad focus and seamless magnification. In addition, it provides the C-AF (Continuous Auto Focus) capability that automatically adjusts focus in accordance with the movement of the camera head and endoscope. This facilitates clearer image capture, both up close and at a greater distance, so that HCPs experience less stress during surgery, allowing them to concentrate on the patient and the procedure's outcome.

VISERA ELITE III combines Sony Corporation’s state-of-the-art digital imaging technologies with the expertise and experience in medical product development that Olympus has accumulated over decades as a leading endoscope manufacturer and addresses the growing needs of hospitals as recognized through extensive exchange with customers.

In developing VISERA ELITE III, Sony Olympus Medical Solutions, a joint venture company of Sony and Olympus, optimized each technology and image processing function specifically for medical applications to create the most advanced, open, and versatile surgical visualization platform Olympus has ever brought to market.

1 Infrared imaging is a special light observation function for observing the fluorescence generated by administering a fluorescent agent called indocyanine green (ICG) and by applying near-infrared light (light with a wavelength of 700-780 nm).

2 NBI (Narrow Band Imaging) is an imaging technique for examining features such as the small blood vessels in mucosa and the surface patterns. NBI highlights tissue by illuminating it with two narrow bands (wavelengths) of light that are absorbed by the hemoglobin in blood. 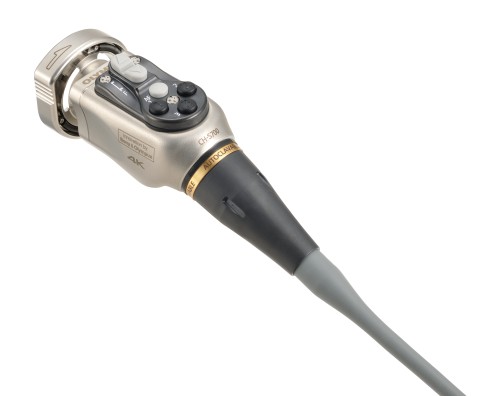 All press releases All stories